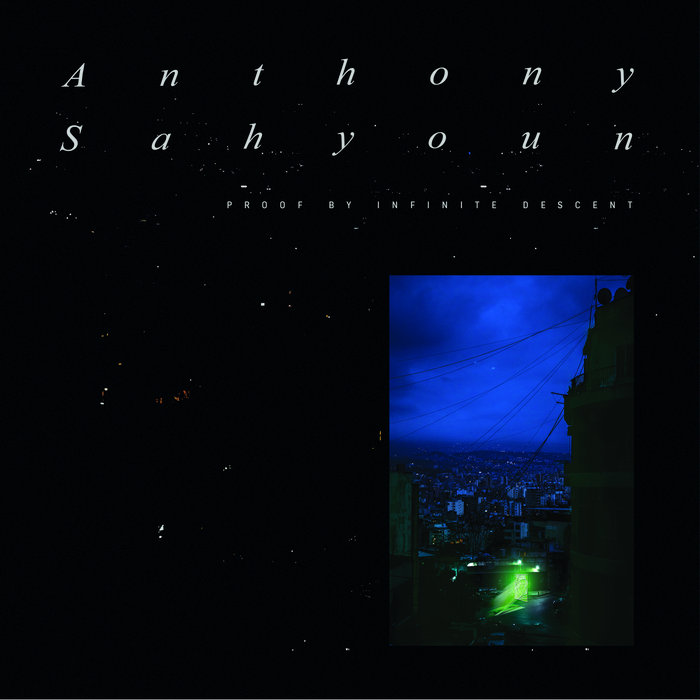 After making a name for himself over the last decade in Beirut's vibrant contemporary music scene, Anthony Sahyoun unveils his solo debut, the evocative and atmospheric Proof By Infinite Descent. Using guitar, synthesizer and voice, Sahyoun tackles themes of mourning, accidental prophecy, and the new holy trinity of God, Capitalism, and Technology – all while mining the seams of experimental electronica and gravity-defying ambient music. Restless, haunting, at times breathtakingly beautiful, this is an album that seeks to rattle cages rather than soothe the comfortable.

Anthony Sahyoun co-founded instrumental rock outfit Kinematik in 2015, in the remote village of Reyfoun in the Lebanese mountains. To this day, the band has released three full-length albums entitled Ala’ (Ruptured, 2017), Murur Al-Kiram (Beacon Sound/Ruptured, 2020) and Al Jadi (Ruptured/Annihaya, 2021).

As a solo artist, Sahyoun works on electronic processing of acoustic elements, programming, drone and ambient music - his music has been described as “apocalyptic, rich and emotionally charged.” His first EP, Post Coital Tristesse, was released under the moniker Mme Chandelier by Ruptured in 2016.

Proof By Infinite Descent is the first installment in the "Corrosion Series", a new project by longtime collaborators Ruptured and Beacon Sound that aims to showcase Beirut's blast-resistant music scene, while building cultural connective tissue in a time of institutional corrosion.

To accompany the release of the album, Beacon Sound and Ruptured have commissioned two remixes of key album tracks, from Beirut-based producer Sary Moussa and Portland-based producer Amulets. Both remixes will be given away as bonus tracks with the purchase of the full album.

All tracks composed, performed, produced and mixed by Anthony Sahyoun at home and at Tunefork Studios, Beirut [2018-2020]

The 'Corrosion Series' is a collaborative effort by Beacon Sound and Ruptured.